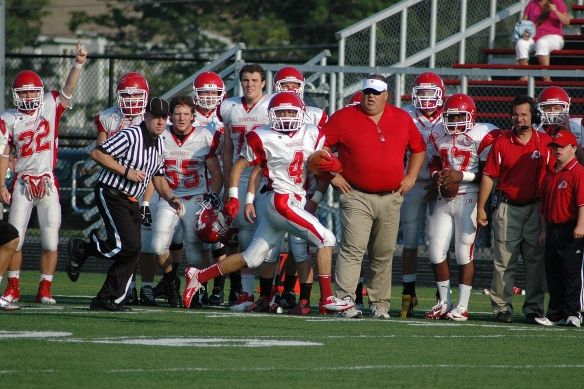 Tedaro France’s 100-yard touchdown on the game’s opening kickoff was just the second time in Red Raider history that a kick returner ran for a 100-yard touchdown score. 1970 tri-captain Arthur Pacheco of Centerville held the record all alone for 42 years until last night. Pacheco had a 100-yard kickoff return touchdown on October 17, 1970 versus Fairhaven. France scored two touchdowns on the night in Barnstable’s 55-6 thrashing of host Durfee.

The Red Raiders started off the 2012 campaign last night with a 55-6 drubbing of B.M.C. Durfee High School on the road, a game that featured a 95-yard touchdown on a the game’s opening kickoff. Durfee won the coin toss prior to the game’s start and it is likely it regretted that decision as senior Tedaro France took the ball 100 yards for a touchdown.